These are some things I learned on the Downeast Sunrise Rail Trail:

1. According to the sign of complex rock/paper/scissors/lizard/Spock-like hierarchy of right-of-way, cross-country skiers trump most other forms of transportation but must yield to dogsledders.

2. Mile markers do not necessarily start with zero at the start of the trail.  Apparently there is a Secret Start somewhere else.

3.  If you get hooked on finding that really cool (at least in our imagination) store at mile 9ish, which is always just around the next bend, you can forget to do that math and end up biking over 18 miles.

I learned all these things about renting a truck.

You may remember that I learned last year that a U-Haul guaranteed reservation means nothing.  Specifically, it means that they guarantee that they won’t raise the rate when you pick up the truck, but it in no way implies that there will be a truck to pick up!   It turns out that Budget has the same system.  I asked Budget “Then what’s the difference?”.  “The price”,  Zach the Budget Guy told me.  And boy, what a difference!

Steve is the one who drove the whole Eastern Seaboard in 2.5 days – Steve, what did I forget?

I learned, from Marcia, that the proper way to hand over a business card in China is with both hands, as a sign of respect:

I learned, in two lessons less than two hours apart, to question my sources and to look again when what I’m hearing makes no sense at all.

In one case it was the GPS telling me that I was 30 minutes away from my destination and then, a mile away, telling me I was 50 minutes away and that I needed to go in the opposite direction than what I thought.   It turns out that it thought I was already in the southbound lane of the nearby highway, not in a parking lot nearby, which would have meant (and unfortunately DID mean) driving 10 miles south to the next exit to turn around and go 10 miles north!  If I had questioned this, or tried another source (MAP anyone?) I could have saved time, driving, and stress.

Soon after this, I learned that a medical opinion that I heard second-hand, that made less sense than my GPS, was … well… a lie.  I really should have questioned it and/or found another source.  The truth came out eventually, in a scene somewhere between a sitcom, a bad reality TV show and a drug-induced dream, and all’s well that ends well, but next time I will ask “Really?” and then check another source.

I learned the GPS can come up with an unlikely route that makes you say “Wait, where does this road go?  It looks like it ends at the water!” and then the GPS can say:

Here is the view from the ferry.  Route A1A continued on the other side.

A long time ago, I figured out that this LessonsLearned thing was only going to work if I am willing to share even the stupidest mistakes from which I am learning.  So here we go.   I have learned to put a reminder on my calendar, even a little tiny one, if I am going to have to change my routine.  This time, I was minutes away from making a mistake into a really big mistake.

I have now commuted to Boston hundreds of times.  And almost all of them on the bus.  So at the end of the day it was a very well-paved synapse path in my brain that led me, via the T, to South Station, then up the escalators and out the center door of Gate 2 to my bus to New Hampshire.   This time, as I reached for the door I said “Oh no!” (or words to that effect) as I remembered that my car was in Somerville, and that I should be taking the Red Line to Davis Square to get it, not getting on the bus at all!

It was a complicated scheme that including watching Baby Lillian the previous night, staying with Sally, and commuting in on the Red Line.  The rest of the plan was to include taking the Red Line back to Davis and driving home, and eventually that is just what came to pass.

I was, however, haunted all evening by the notion of how close I came to figuring this out five minutes later than I did, on the bus and headed up I93!

Sally thinks I need the new Apple 4S so that I can say to it “remind me to go to Davis when I leave work”.  But I think one or two words on my calendar around the 5PM spot (“drive”/”davis”/”get car”) would have done the trick!

1. Arrive early.  The party starts at noon, but things are setting up all morning, so arrive early to get a parking spot – read on…

2. Arrive from the West.  Drive right into town.  Get as close to Main Street as you can, and plunk down your money to park.  There’s no getting around it, so at least get close.

3. If you arrive from the East, friendly and well-meaning volunteers will direct you to a lot 1.5 miles away from Main Street with a shuttle bus and tell you that it’s your only choice.  Politely ignore them and drive to a closer lot, maybe one you can walk to.  Better yet, pass by town and arrive from the West!

I have learned how to use the new Hubway public bikes in Boston and it’s a hoot!

I took the bus to Boston and brought my helmet.

I picked up a bike at the corner Arlington and Boylston Streets, popping in my credit card and following the prompts to get a code to unlock a bike.

Since you can’t ride through the Public Garden, I had to ride in traffic around the block, which was scary the first time.  Then I popped onto the Fieldler Footbridge, and onto the Esplanade!

All my life, it seems, I have admired and envied those lucky Bostonians who walk, run and bike along this glorious path along the Charles River.  Now I’m one of them!

I rode my little bike, complete with retro mechanical bell, along the water, over bridges, along the path.

I asked a walker to take my photo and she readily agreed.  Just as I was getting back on the bike and reflecting on just how geeky that was, another Hubway biker coming towards me flashed his iPhone and said “I’m going to ask her to take my picture, too!”

I took the BU footpath, just past Kenmore Square and rode a short way to my office, which has a Hubway bike stand right on the end of my street!

I once had a CIO who had a five core principles of business and one of them  was “Fail Early”.  I learn this lesson over and over.

The entire Agile software development process is based on this.  I’ve often seen the success of showing early results “Is this what you meant?” to get a Yes, or way more importantly, a No.  So easy to change course early, if you just get that feedback!  So much harder if not.

Nowhere, perhaps, is this more applicable than to driving when  lost!  Why not find out if I am or I am not where I think I am, way before I go even farther in the wrong direction?

In my car, I have two separate devices to tell me how lost I am, and to get me found.  Sure, they don’t always work in the wilds of the places I drive, but they definitely don’t work when I don’t ask them!

It’s nice to putter around back roads when that’s the intention.  But I’ve learned (or I’m fixin’ to learn) that when I am really trying to get somewhere, it’s important to know if I’m driving in the right direction.  Or not.

This morning I saw the snazzy black and green bikes in Kenmore Square, and then another batch on the little street leading to my office – they are here!

Hubway is the new program in Boston to pick up a bike in one of many locations, ride to to another, and leave it there.   The map is here.

Lauren just told me that if your ride is under 30 minutes it’s FREE! 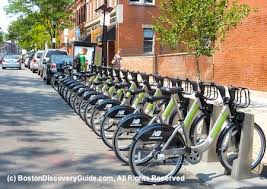