I was fixin’ to resurrect and re-post one of the greatest things I have learned in the last few years and I found out that I’ve never shared it!  So here we go…

A few years ago, I learned about something that I had never considered before.  Gene told me that where he lived in Michigan the clouds rolled in around late October and the skies cleared again some time in March.  They NEVER had the experience of a “Cold Clear Winter Day.”

Living in New England forever, I have grown up with Cold Clear Winter Days.  Those are the days with bright blue skies and the wonderful sunshine that warms your heart, even as the air freezes your nostrils shut.  Until this life-changing conversation with Gene, I had always just thought of them as winter days.  I never made the distinction between cold cloudy dreary winter days and Cold Clear Winter Days.  I just took them all as they came.

At that moment, I learned to look at winter in a different way.  I have purposely enjoyed and savored every single Cold Clear Winter Day.  At least I thought I did until last week, when someone mentioned the clear skies and I realized that I had again become complacent and I was forgetting to be grateful for this gift.

I am officially going back to noticing and recognizing the glory of the Cold Clear Winter Day, and I invite you to do the same! 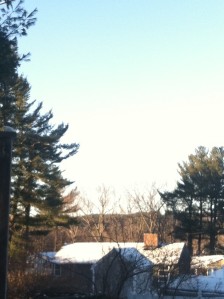